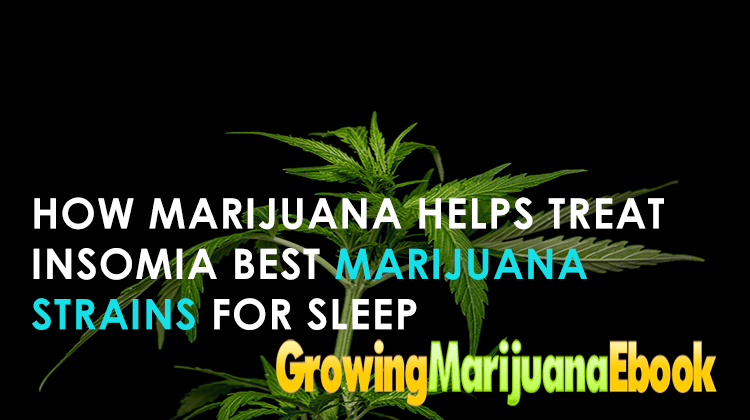 It is common knowledge that cannabis is frequently used to induce sleepiness and drowsiness. This is a feeling that comes naturally because marijuana consumption is, in fact, associated with the body system that controls a person’s ability to sleep. Find out what’s the best marijuana strains for sleep.

One of the most common types of disorders that just about anyone goes through at least once in their lives is the feeling of insomnia. With marijuana usage for medical treatment starting to surface in various places around the world, it is quite natural to hear it being used as a form of insomnia treatment. So how exactly does marijuana trigger a person’s sleep? Let’s get started:

Insomnia refers to a type of sleeping disorder wherein patients find it difficult to fall asleep. Oftentimes, people would stay up for long hours at night which can damage the way their body functions or how their mind works. Insomnia is actually quite common. In fact, the American Psychiatric Association stated that around 40% of all adults in the USA experience insomnia and other sleeping disorders regularly. This means that a whopping 70 to 90 million people in the USA alone display symptoms severe enough to be diagnosed with some sort of sleeping condition.

There are levels to the degree of insomnia that a person experiences, which means that it is caused by a wide range of reasons. Short-term insomnia refers to mild insomnia which is more common in a person’s everyday life. This is usually caused by stress, discomforting thoughts, bad experiences, or even sudden shifts in the hours that you sleep. Chronic insomnia, on the other hand, is a much more serious condition and may need to be treated by professional health experts. This is usually caused by excessive substance abuse, mental illnesses such as depression and anxiety, or physical disturbances like muscle spasms. Unlike short-term insomnia, this may last for months.

How does marijuana affect a person’s sleep?

For what it’s worth, cannabis has been popularly known as a very effective sleep-inducer for many insomnia patients. Just like any other medical benefit that marijuana consumption has to offer, the science of drowsiness via cannabis lies within the chemical composition of weed called cannabinoids. Here’s a quick explanation as to how marijuana consumption can induce sleep:

Cannabis plants contain a set of chemical compounds known as cannabinoids. There are currently over a hundred known cannabinoids found in a marijuana plant. While humans and animals are also known carriers of cannabinoids, cannabis plants are unique for being one of, if not the only plant to contain these compounds. Out of all the known ones, there are two main cannabinoids which are primarily responsible for the bulk of effects associated with marijuana: the tetrahydrocannabinol and cannabidiol which are also known as THC and CBD, respectively. THC is known to be the main psychoactive component that produces mind-altering and “high” feelings. On the other hand, CBD is the non-psychoactive compound that gives cannabis its medicinal value.

Our human bodies contain what is known as an endocannabinoid system. This system is responsible for a long list of bodily functions including sleepiness. With the THC level of cannabis coming into contact with the body’s endocannabinoid system, receptors send signals to the part of the brain that is responsible for a person’s dreams. When consuming THC, the amount of REM sleep a person receives is reduced. Basically, REM sleep refers to the time spent by a person dreaming. By reducing this, more time is given to a person’s “deeper sleep”, thereby making users feel more refreshed and relaxed enough to get drowsy.

Because of the properties associated with sleep and THC, it is more effective to induce sleep using marijuana strains with higher THC levels. With that being said, there are a number of potent strains out there that catch the balance between powerful and relaxing feelings. Here are our top choices for Best Marijuana Strains for Sleep:

All of these marijuana strains are great for preventing users from experiencing insomnia. Because insomnia is a sleeping disorder that should not be taken lightly, it is recommended to treat it as soon as possible. Marijuana is a great way of treating insomnia. It is a natural way that deviates from the traditional way of medicating insomnia patients. Always remember to be careful when using this substance. Know your limits and always make sure you ingest the proper amount.