Why Do Marijuana Plants Turn Purple? Here Are The Best PURPLE Marijuana Strains 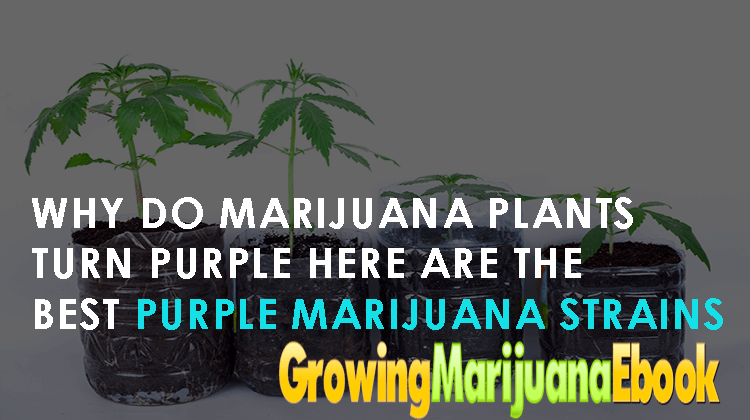 One of the intriguing aspects of the cannabis plant is the appearance that it displays. While it does carry a negative stigma around the community, the sight of a prolific cannabis garden is something that every marijuana enthusiast would appreciate. The dark, vibrant shades of green that radiate all throughout the colas and leaves make it a much more enjoyable cultivation experience. Of course, it is also hard to ignore the dank, frosty buds protruding from each node of the purple marijuana strains that you would wish so dearly to smoke.

Why do Marijuana Strains Turn Purple?

Marijuana strains actually contain a certain pigment in their leaves and buds called anthocyanin. This particular compound, however, isn’t exclusive to just marijuana plants. The redness that you see in strawberries and the blue that you get from blueberries are also attributed to the anthocyanins, which are naturally present in many forms of agricultural products. With that being said, certain marijuana strains (particularly Indica strains) contain higher doses of anthocyanin than others.

Anthocyanins are chemical substances that belong to the Flavinoid class of compounds. Together with cannabinoids and terpenes, flavinoids make up the chemical composition of cannabis plants. Despite the name indicating a link to a cannabis plant’s “flavor”, flavinoids actually do very little to influence the tastes that marijuana strains produce. As a matter of fact, they lean much more towards the color pigments and hues of cannabis plants.

Of course, it didn’t take long for people to start researching about the pigment in order to scour any medical properties that anthocyanin can provide. And as a result, scientists did find that anthocyanins can, in fact, impact the health. It turns out anthocyanins can help cleanse the body and get rid of any wastes and bacteria found in a person’s system. It also gives marijuana strains the ability to reduce any inflammation in a person’s muscles and regulates the development of diabetes symptoms.

Factors affecting the development of anthocyanins:

Many myths and theories surround the development of purple hues in marijuana. Beliefs such as stopping the nutrient absorption of a cannabis plant and freezing it are all known to be false techniques that will turn the cannabis plants purple. Of course, there are some other factors that can help bring out the purple colors, including:

What are the differences between purple marijuana strains?

Purple marijuana strains are something that many people sought after. It’s because they are, in fact, much more intriguing to look at due to the unusual array of mixed colors. But one thing that people do not try to understand is how it actually differs from other marijuana strains. Does the purple color have anything to do with a marijuana strain’s potency? Does it give more medical benefits?

While purple marijuana strains are better in terms of appearance, they hold little to no advantage in terms of effects and medical value. This is because every cannabis plant does contain anthocyanins, albeit in different amounts. Of course, the higher levels of anthocyanin will give users more of the medical benefits stated above but the difference that it makes will most probably be immaterial with regards to the overall impact of the cannabis strain’s performance.

The purple hues found in a marijuana strain definitely make up half of the growing experience.  It gives a nice touch to your whole cannabis garden and makes users crave for its buds even more. Of course, the science behind as to why marijuana strains turn purple is something quite simple to understand. Knowing why definitely gives users more opportunities to cultivate their own batches of purple marijuana any time that they want.