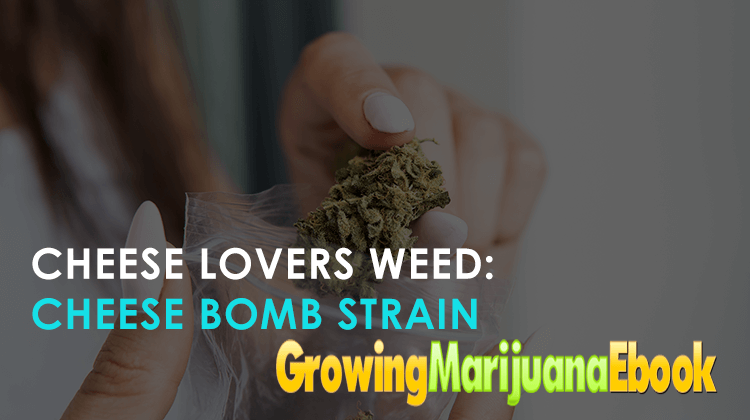 The Cheese bomb Strain is considered a good “all-around” strain as hits give that intense potent and deep high at the same time it is said to stimulate the user mentally, thus the tag for being a good all-around weed. For cheese and weed lovers, this is definitely a go-to smoke as its aroma and taste remind its user of that earthy, nutty cheese.

Developed by the Netherlands based Bomb Seeds, it was created from cross-breeding the UK bred Cheese strain and 2 of Bomb Seeds genetically developed strains, Cheese #1 and Cheese #3. This predominantly Indica strain (95% Indica and 5% Sativa) emits a funky earthy aroma reminiscent of stale cheese, thus the name. The high it gives is just as heavy as it tastes. Some are taken aback by the immediate high it gives leaving you with that leaden experience.  The physical relaxation it offers is coupled with the mentally calming slow-motion high. It has a moderate 10% to 15% THC content.

Considered an easy plant to grow, The Cheese bomb strain can both be grown indoors or outdoors. Considered one of the faster flowering strains, it takes 6 to 8 weeks before completion. The buds produced by the Cheese bomb strain are big, fat, and spade-shaped accompanied by orange and yellow-green hairs and trichomes. Its growth height has never posed a problem to growers as their height usually at 3 to 5 feet, thus making it suitable for indoor growth, yeilding, and an average of 400 to 550 grams per square meter. However, If grown outdoors, it could reach heights over 5 feet tall.

The high Cheese bomb strain offers is immediate and the user that instantaneous stoned experience. Considered one of the longer-lasting strains, the plastered feeling could last hours and hours. The sedated feeling slowly encompasses your high body, giving you the urge to be couch-locked, thus this strain is highly recommended for evening usage as one will be transported to that blissful weighty tranquility. Usually, no tasks could be done when this hits the user.

THE CHEESE BOMB STRAIN AS AN ORGANIC MEDICAL OPTION

Used more as a recreational cannabis strain than medical marijuana, this strain could also be an option to temporarily ease both physical and mental disorders. That slow-motion high it offers calms the nerves of the user thus could be an option to find solace for chronic stress and anxiety. this sedative effect of the Cheese bomb weed keeps the user’s mind in a blissful state making the user escape the realities of life-giving them stress and anxiety.

Regarding the curative physical conditions this strain could remedy are inflammation, nausea, insomnia, and chronic pains. As mentioned earlier, the immediate heavy hit could produce a numbing effect alleviating the user’s chronic pains, nausea, and inflammations. These conditions are met with that feeling of senselessness over the whole body where pains caused by these ailments are eased. The urge to be couch-locked gives the user a sense of heavy relaxation which also addresses the problem of insomnia. since it is recommended for evening usage, the user usually, after enjoying his high goes into a deep slumber.

The long-lasting effects of this strain are why users use this for medicinal purposes. the high it gives is very satisfactory and will keep the user medicated for hours and hours.