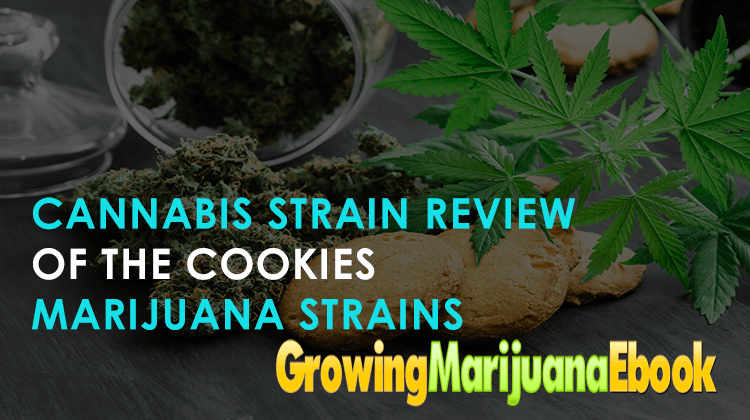 All the hustle and bustle surrounding the cannabis scene, it is easy to overlook a couple of premium and rare marijuana strains. Because they aren’t as well-known as others out there, users won’t often get the chance to smoke these delicious and awe-inspiring marijuana strains. One example of such is the Cookies marijuana strain, a decadent and premium hybrid that will leave you breathless with its hard-hitting effects. Many people wonder if it is related to the famous Girl Scout Cookies marijuana strain that is beloved by many people. Well, while it does have some sort of genetic connection to the strain, it is still considered as a different hybrid entirely. Let’s get a little more into the different aspects of this Cookies marijuana strain and see why it deserves a lot more recognition than it gets!

The Cookies marijuana strain is an indica-dominant hybrid that has a genotype of 60% indica and 40% sativa. Not much is known about the history of the Cookies marijuana strain as people still haven’t found out as to where and who was responsible for first developing it. However, the lineage and origins of this strain can be traced back to Thai and Afghani descent. In terms of parent strains, the Cookies marijuana strain comes from crossbreeding a three-way of some of the most powerful and potent genetics out there. This consists of the renowned OG Kush, Durban Poison, and some lovely and sweet-smelling Cherry Kush. While it does carry a genetic makeup similar to that of the Girl Scout Cookies, there is still some noticeable difference such as the lack of F1 genetics and the addition of the Cherry Kush. The Cookies marijuana strain is fairly new to the cannabis scene. As such, it still hasn’t been able to rack up any awards to its name. But this does not mean that it isn’t worthy of high praise from cannabis fans and smokers out there.

The Cookies marijuana strain displays very strong indica characteristics in both its growing information and appearance. Despite having some sativa genetics as well, keep in mind that the Cookies strain will thrive more of treated under indica-based conditions. When cultivating this strain, make sure to give it long hours of sunlight every day. The dense and compact marijuana nugs will need this in order to fully dry out and get rid of any excess moisture that may cause molds. The Cookies marijuana strain is an easy type of cannabis strain to grow. It does not require any special conditions in order to make it thrive. As such, indoor growing is just as effective as using an outdoor setup. The flowering time for this strain will take an average of about 7 to 9 weeks. Outdoor growers can expect their harvests to take place from late September to early October. As for its yield rates, the Cookies marijuana strain will produce around 450 grams up to 550 grams for both indoor and outdoor cultivation.

In terms of appearance, the indica traits are still very apparent for this strain. Exposing it to slightly colder conditions will bring out some purple hues in both its buds and leaves. The small yet robust plant structure grows up to around 3 to 5 feet in height, making it great for maximizing your growing areas. As what you would typically expect from indica-dominant strains, the Cookies marijuana hybrid is very bushy and compact. The dense and heavy nugs emit a dark green color with countless glands or sticky trichomes covering every inch of it. These oversized, popcorn-shaped buds are supported well by the strong branches of the plant. Vibrant amber pistils give this strain a striking appearance, making it eye candy for any marijuana grower out there.

The flavors and aroma of the Cookies marijuana strain combine sweet, delightful notes with some classic dank qualities. Even during the cultivation stage, your nostrils will be met with sharp notes of cream, vanilla, spices, and mint. The nutty fragrance gives it a texture that will remind you of Christmas mornings during your childhood. Because it is an indica-dominant strain, there will be a slight presence of diesel-like notes in its smell.  As for its taste, this strain will dominantly impart a flavor of… you guessed it, cookies. With each hit that you take, you will be met with a wild sensation of flavors. It mixed a very earthy flavor with some piney and citrus accents. Subtle hints of cherry will also be noticeable, giving this strain a very mouth-watering quality.

The Cookies marijuana strain induces a very cerebral high, giving users a clear and lightheaded feeling that fills their minds with a euphoric haze. In just a few minutes, you will notice that your sociability and energy have taken a boost. The mental stimulation that users get is very dreamy, making them feel chilled out and relaxed without actually crashing their minds. There is also a slightly physical sensation in your muscles that give this strain an added therapeutic effect. This keeps you in one place and melts your body down into a couch-locked position for many hours. The Cookies marijuana strain carries a THC level of 22% to 25% on average. There are also a lot of medical properties that can be exploited by this strain. The relaxing and soothing mental high gives this strain a distinct advantage for people who feel restless and worried about their problems. A couple of hits of this will surely throw out any worries that they may have on their shoulders. People who display behaviors of ADHD and mood swings will surely feel drowsy and sedated after using this strain. Additionally, the euphoric and happy mental stimulation works great for treating anxiety levels and symptoms of depression. The Cookies marijuana strain has a CBD level that clocks in at 0.10%.

The Cookies marijuana strain is a rising star among all other strains in the cannabis industry. It is easy to see this strain being a contender for awards and a fan favorite among smokers and stoners around the world. Because it induces a very balanced high with its addicting flavors, the Cookies marijuana strain is definitely a winner in our books. Make sure to check out Crop King Seeds for a chance to cop your very own pack of these Cookies marijuana seeds! They offer worldwide shipping with stealthy delivery methods. This makes them ideal for offshore customers located outside of the USA and Canada! Accepted modes of payments include cash, BitCoin, MasterCard, and Visa. Additionally, electronic transfer Interac is available for Canada-based customers.