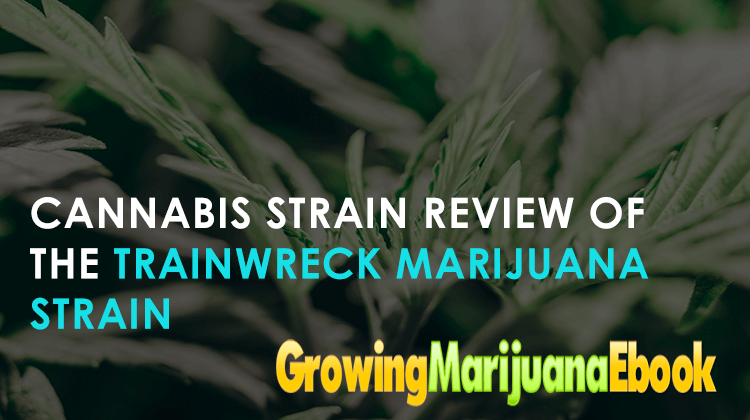 One common problem for long-time marijuana smokers is that due to the frequency in which they smoke cannabis, they have developed a rather high tolerance to weed. This means that many of them do not get as stoned as they would like because their bodies have become accustomed to the THC levels that some strains possess. So, if you are one of these people, then you should go ahead and try out the Trainwreck marijuana strain. Known for its hard-hitting effects and mind-boggling highs, this strain will definitely put your claims to the test.

For many years now, Trainwreck has been a staple among experienced cannabis users everywhere. With the reputation that it carries, it is easy to see why so many people have adored this one of a kind strain. Let us give you guys an in-depth review of the Trainwreck marijuana strain and explain why it is so popular in the first place.

Background and origins of the Trainwreck marijuana strain:

The origins of the Trainwreck marijuana strain are often shrouded in mystery with people coming up with all sorts of stories and theories as to how it was first developed. The most widely accepted version takes place during the early 1970s where two gentlemen from California decided to cultivate a fresh batch of cannabis buds. As the story goes, a terrifying train wreck took place near the site of their cannabis crop. This led them to harvest their crop early in order to avoid any accidents in their gardens. Once they started lighting up the buds of these strains, they were blown away by how potent and flavorful it turned out.

The Trainwreck marijuana strain results from crossbreeding three well-known landrace genetics: the Thai, Afghani, and Mexican sativa strains. Putting all of these together resulted in a winning combination that creates the perfect blend between subtle body highs with super mind-altering effects. The Trainwreck marijuana strain has a genotype of 65% indica and 45% sativa. As such, it will display a rather balanced characteristic of both species in terms of growing information and effects.

The Trainwreck marijuana strain is a fairly easy strain to grow. It doesn’t offer any specific conditions that may cause the growing process to be harder than it is. As such, both beginners and experienced growers can have this strain in their gardens frequently. With the capability to indoors and outdoors, the Trainwreck can quickly adjust to any type of climate so long as there is an ample amount of light source. Buds for this strain will be ready during early October, which will usually call for around 8 to 10 weeks of flowering time. Additionally, outdoor setups can produce an astounding 700 grams of yield which makes this a fairly generous plant.

In terms of appearance, the first thing that growers usually notice is the presence of resinous buds that are completely covered in crystal-white trichomes. This is a good sign of potent and hard-hitting strains. The bright green hue of the leaves is also complemented well with the distinct yellow shades that surround the plant. Additionally, there is a presence of amber pistils that give the buds a very attractive appearance. Strong smells of spice and earthiness are distinctly noticeable as you start breaking up the buds of this strain. The sourness of the citrus notes also blends perfectly with the subtle sweetness of the buds. As for the taste, Trainwreck is very smooth on the tongue. Strong hints of earthiness and pine coat your entire palette.

As you can probably tell from the name itself, the Trainwreck marijuana strain is a very hard hitter in terms of potency and strength. Within the first few minutes of smoking it, Trainwreck instantly hits you with a barrage of both mental and physical buzzes. This trait makes it extremely popular for both medical and recreational purposes. It carries a THC level of 22%. First, you are hit with a very dreamy and euphoric feeling that puts your mind into a state of pure bliss. You are then given a very lightheaded high that helps you think of very creative and happy thoughts.  As the physical stone kicks in, your muscles start feeling numb and lazy. Soon afterward, a heavy feeling of couch-lock blankets your entire body in a feeling of pure relaxation. Good luck trying to get up after that!

Because of the presence of both indica and sativa influences, the Trainwreck marijuana strain is great for treating both mental and physical conditions. This strain has a CBD level that clocks in at less than 1%. As such, it relies mainly on its THC-induced effects on some medical value. Some of the most common uses of Trainwreck as a medical strain include treating PTSD, ADHD, and stress. Of course, the body sensations produce a very effective sensation that treats and mitigates any symptoms of muscle spasms, back pains, and any other discomfort or level of pain that you may be experiencing.

The Trainwreck marijuana strain is the perfect strain to smoke for virtually any condition that you may have. Because of the heavy-body effects that it produces, one must be aware that it can get users quite drowsy. As such, we recommend taking this strain in the evening. The Trainwreck marijuana strain is available for orders at Crop King Seeds. If you want the best quality and most potent marijuana buds of this strain, then Crop King Seeds is the best option for you. Shop now!